This delightful watercolor was inspired by the memory of the solar eclipse last year.

I’m a total urban dweller, so Emerson and Thoreau have always seemed exotic literary hors d’oeuvres, nibbled delights too rich to dine on. Or too crunchy, like a big bowl of Grape Nuts cereal.

And then there’s last summer’s car trip– a drive down to Oregon with countless other astronomy nerds that inexplicably becames something else entirely. I was in a crowd of people, and I could have been completely alone, swept away on gravitational waves.

First let me just say, Pipo is a saint. Pipo is my stepdad.

I remember that when I was a kid, Pipo loved reading graphic novels. I guess my mom was afraid that my brother and I would gravitate towards reading them instead of the classical fare we were encouraged to study instead, so she ridiculed the genre and anyone “low” enough to read them and then she took them from him. That’s right, TOOK them.

Ie…he let her take them from him. I now think peace at any cost is costly indeed, but those 20/20 lenses of revisionism sure are convenient.

Graphic novels are still deeply embedded in popular culture, but additionally are now recognized for the important art form they are.

One of the things that appeals to me about them is the fact that they, like public art, are not exclusive. I think it’s awesome that writers and visual artists can collaborate to bring stories to life for anyone. No exclusions!

How to comprehend the grand scale of the ocean, its depth and mystery, the union of sky and seas?

I was thinking of sailing, going out on the water before dawn and returning past dusk. The colors of the land like a compass of of color to guide me back to solid earth. 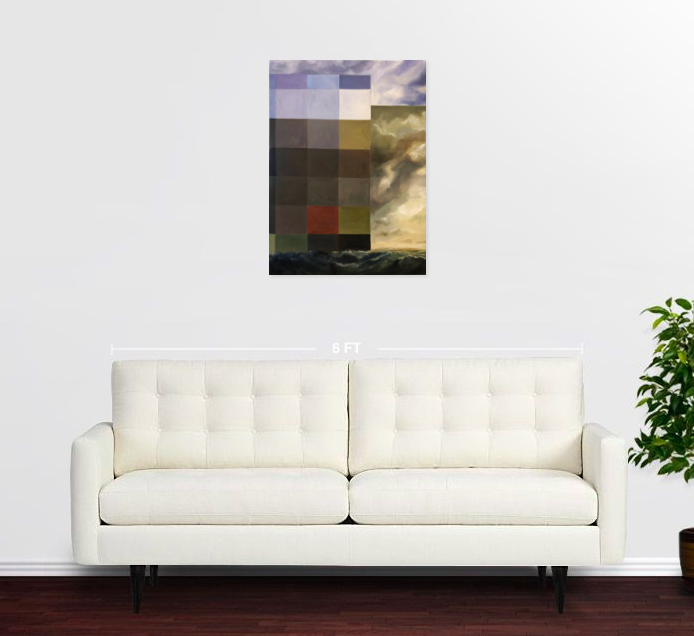 If you’ve ever felt disconnected or alienated, like I have, remembering the interconnection of all humans through Mitochondrial Eve and Y-Chromosomal Adam is a way back to community. The biosphere really neither loses nor gains matter, it is always recycled so in our cells reside stardust and remnants of all life that preceded us. Even when we don’t feel it, it’s always there. 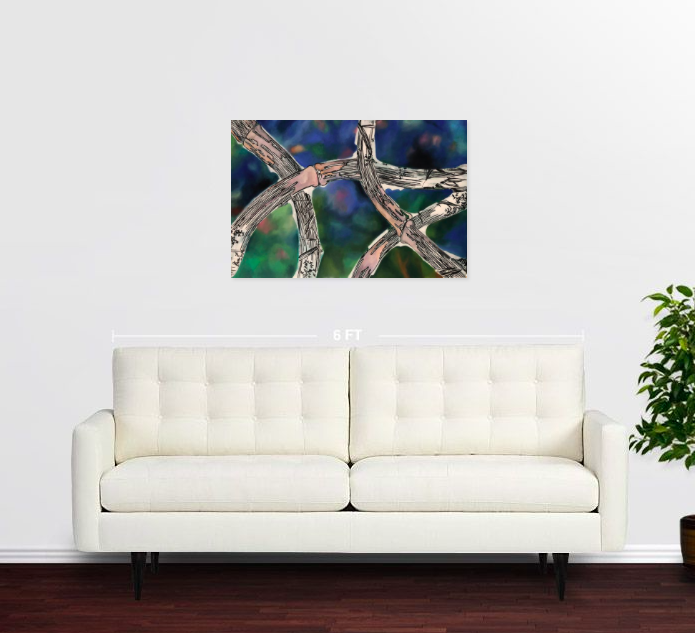 This one has been on my easel for a while. It started out as a meditation on water reflections I was mesmerized by during a hike. Then as I was looking at a map of where I’d been, it turned into the stripes. Finally the moon, both full and new, emerged with an internal landscape.

The outline of a hiphop dancer evokes the feeling of weightlessness and freedom against the backdrop of a full moon and the stripes of palm fronds against a brightened sky. 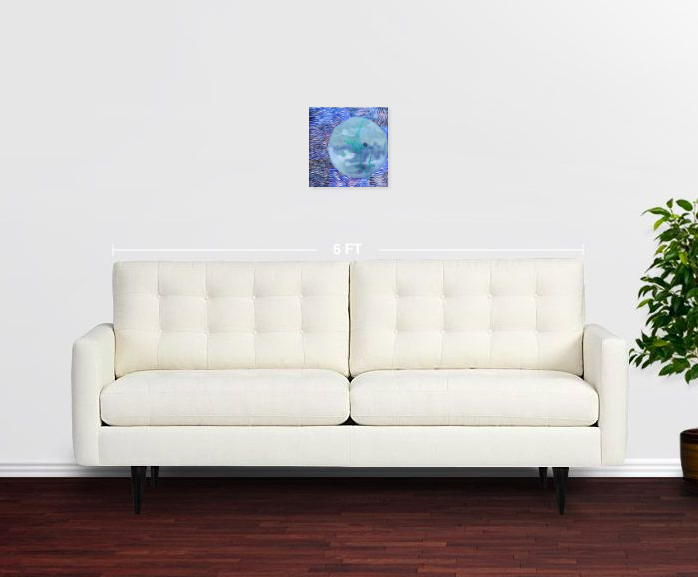 Nietszche wrote, “No one can build you the bridge on which you, and only you, must cross the river of life.”

This is what my bridge looks like from the perspective of a drone. The loopy pathway is an apt representation of the meandering course I take, distracted from a straight path by the actual and philosophic reflections on the moving water.  That and I don’t know my right from my left…always lose my way! 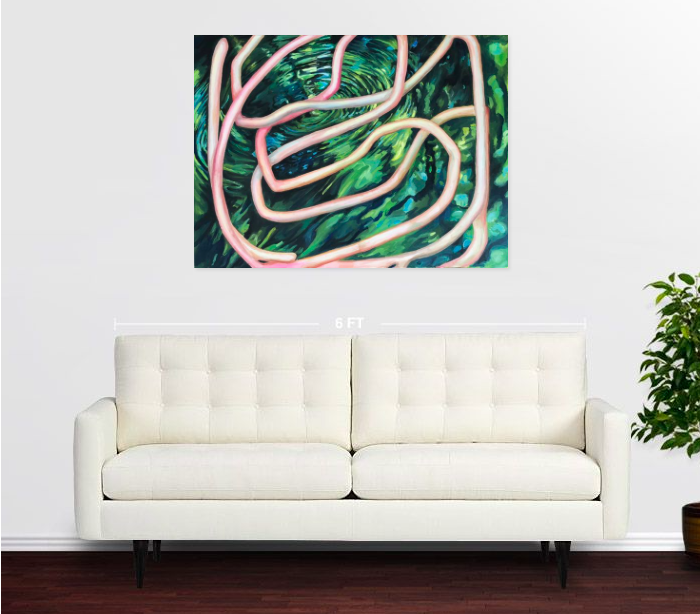 Chan Chan, a famous song from Cuba, describes a country boy’s journey through life as a passage through the landscape. It is a rustic voyage on foot and by horse. We experience so much of our landscape differently, whizzing through it in cars, trains, planes, or online through apps like Google Earth. Each tempo is a prism that limits or expands our experience of the environment. 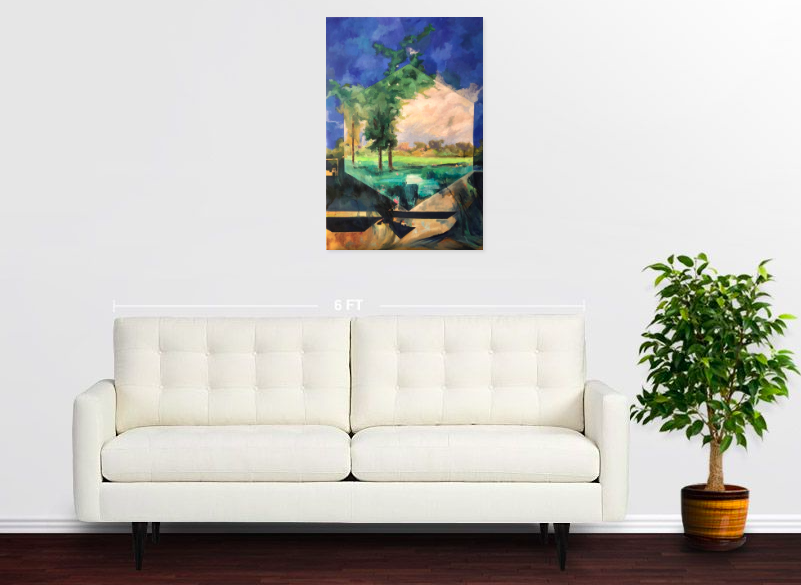 The inspiration behind this painting is a cosmic dance and here the sun and moon equally share the dance floor. My partner and I both studied astronomy in school. Like countless others we drove through the night down to Oregon to see the full solar eclipse last summer.

We slept for a couple of hours in the back of our car, in a crowded parking lot of a Safeway. There were cars from Canada, California, Washington, and Oregon. Each full of excited pilgrims and astronomy nerds, waiting for totality.

The eclipse was an ecstatic moment, a true aesthetic experience full of sweetness and wonderment. But it was the shadow bands streaking across the floor that made my heart spin and leap like a leaf caught in a whirlwind.

And then there’s Brimful of Asha (White Face). Because opposites qualify each other– black and white. Just a tom peeking at you with a Bollywood tune on my mind. 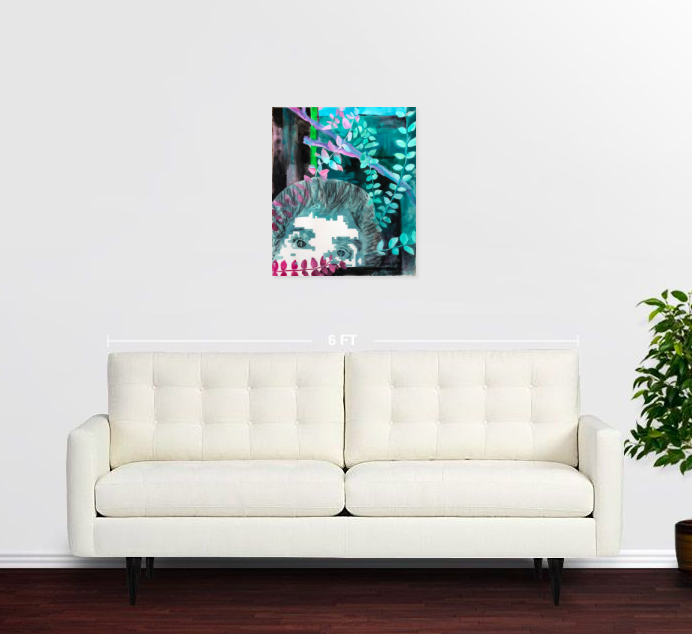 This is a fun, pop image, and I hope it evokes a feeling of joy, like a kid playing hide and seek in the garden.

Asha is a famous Bolliwood singer, who while remaining behind the scenes, brings joy and hopefulness to millions through her music.

I think of the countless cultivars in our environments as bringing nature’s hope and song into urban spaces.

I paint my pixilated eyes and tree reflections flashing past a window. A puckish tom providing a peek at another landscape. 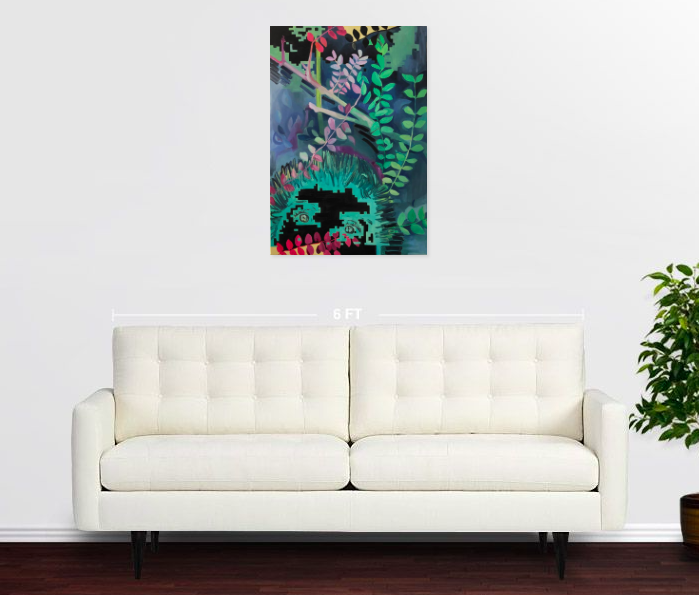 Think of this piece as the genesis of the Puer archetype series.

The Eternal Man Child speaks in his own words:

While visiting friends in Buenos Aires, I stepped through an Aleph and was instantly born in Seattle, WA.  Yes, I was conceived full grown. With a beard.

I looked in a mirror and saw my previous self, who weirdly looked like me without a beard… or exactly like my mother, the great artist.

It was really trippy, especially with The Kinks playing in the background. 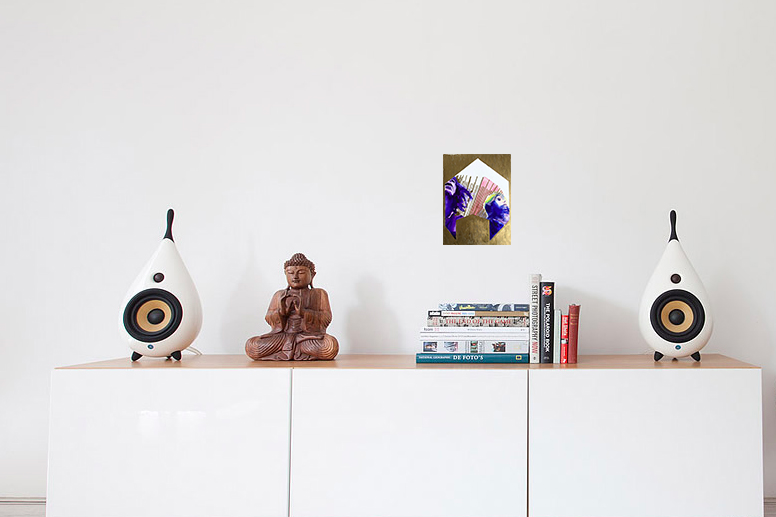 I’ve been working on exploring a number of different archetypes through a variety of media in the Triumphs project which aims to transform notions of identity.  I call on a variety of recognizable symbolic markers to learn what it means to wear new identities in the stories we tell others and whisper to ourselves. Among the archetypes I explored are Migrations (The Hanged Man), Whistling Dixie (The Mandala), Charites (The Anima), Book of Hours (Judgement)…and now Puer (Eternal Child).

I’m always a little superstitious about showing my work before it is ready, but now that the series has taken shape it is time to make the work public.

Puer expresses a hunger for independence and freedom. He’s opposed to boundaries and limits, and prefers living in his own head instead of reality. To manifest this archetype, I assume a completely different identity, wearing a male persona complete with a beard and androgynous clothes, have an anglo name, and leave behind the limitations of my race and gender.

I first conceived of this series immediately after last year’s ACES Conference. It was the most exciting event I have attended, ever! To see hundreds of artists of color all gathered for one purpose, to stand witness to the stories shared by presenters and fellow artists was deeply cathartic…and exhausting. The last day of the conference coincided with the opening Our Daily Armor III at Virago Gallery. Several artists at ACES were also showing at Virago with me, and at the opening they too mentioned how moved and fatigued they were by the experience.

Resisting external and internal colonization, fighting the good fight– these take a lot out of you. It’s that extra emotional, psychic, and creative cost you pay for being an artist of color who engages with the world as it is.

I though deeply about  Elisheba Johnson’s comment that the art world was a gated community. It’s not just about how segregated it still is (don’t believe me? just look at the Power 100). It’s about how those who don’t face the same struggles POC do have the mental, emotional and creative space to explore and play.

I realized I needed to activate Puer in my studio.

Because Puer hates being constrained he goes where he pleases, traveling freely through an Aleph discovered in a Jorge Luis Borges short story.

I’ll begin posting about each piece in the Puer series now, so you can get to know where he’s been going and what he’s been painting.