My ART 202 students are studying collage aesthetics in painting practice and we were discussing how artists bring real life into the studio, and the reverse: artists bringing the studio out into real life. Of course we looked at Banksy’s latest contribution to Guerrilla Art in which the little girl from Les Miserables is crying in front of a French flag as tear gas rises from a canister on the ground.

The mural is one of several pieces in which Bansky addresses conditions and abuses at the Calais refugee camp.
One of the other murals in his series depicts the late Steve Jobs (himself the son of Syrian immigrants)on one of the Calais camp walls. 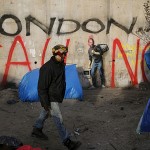 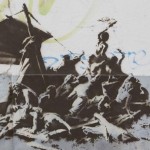 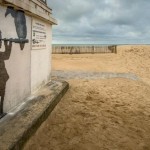 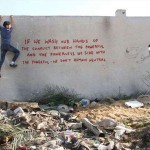 Ever wondered the differences between realism, representation, and abstraction?

I created this short tutorial for my beginning painting students who were having a hard time grasping the differences. Enjoy!

Do you have loads of art or pictures that you want to display at home or in your studio?

This uber short tutorial on hanging a gallery wall in your space will get you there quick as can be.

Tomorrow my drawing students will work with their first life model. They will also work with ink. 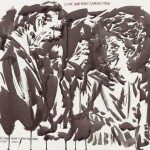 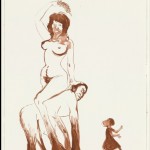 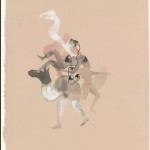 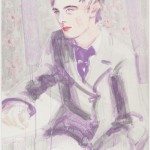 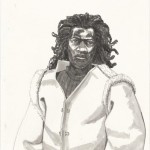 I just spent the most rewarding two hours of my Sunday, snooping around NY Library’s digitized collection. There are over 187,000 items to look at and mine for inspiration. I fell in love with this WPA litho of a poker game, don’t you think it’s super cool?

Check out this amazing collection: http://digitalcollections.nypl.org

Some time ago, I found a great article on creativity in the inter webs and copied these traits to remind myself of why I’m in this business. Couldn’t help it if I tried!

1. sensitive
Being sensitive helps creativeness in many ways:
a. it helps with awareness of problems, known & unknown
b. it helps people sense things easier
c. it helps to cause people to care and commit themselves to challenges or causes.

2. not motivated by money
As important as money is in most societies or economies it is not a driving force for a creative person. Generally they have an intuitive sense of the amount of money they basically need and once that need is fulfilled then money stops affecting or driving them.

3. sense of destiny
Intuitively creative people know that they have a purpose, a destiny or they realize that they can choose or create one to drive them to reach greater heights of skill, ability, or talent.

4. adaptable
Without the ability to adapt people could not become creative. But rather than adapt to something they choose to adapt things to suit them, their needs or the goals they are striving towards.

5. tolerant of ambiguity
Two or more things or ideas being right at the same time challenges the thinking of a creative person. They love to be ambiguous to challenge other people and ideas. Ambiguity helps them see things from many different perspectives all at the same time.

8. see possibilities
Average people, people who dont believe they are creative, people who are fearful or resistant to creativeness or creative thinking prefer to work within limits with limited possibilities.
Creative people love to see many, even infinite possibilities in most situations or challenges.

9. question asker
Creative people, especially highly creatives, probably came out of their mothers wombs asking questions. Its in their nature to question. Question yes, not actually criticize. Their questioning
nature often mistakenly appears as criticism when it is simply questioning, exploring, examining, playing with things as they are or might be.

10. can synthesize correctly often intuitively
This is the ability to see the whole picture, see patterns, grasp solutions with only a few pieces, even with major pieces missing. Creative people trust their intuition, even if it isnt right 100% of the time.

11. able to fantasize
Stop looking out the window Billy. Susie pay attention. Teachers, parents, and even friends often tell creative people this. Highly creative people love to wander through their own imaginary worlds. This is one of the major themes of the very popular cartoon strip Calvin and Hobbes. Both Calvin and Hobbes (Calvin’s alter ego?) are perpetual CRAYON BREAKERS.

12. flexible
Creative People are very flexible when they are playing with ideas. They love to look at things from multiple points of view and to produce piles of answers, maybes, almosts, when other people are content with the or an answer or solution.

13. fluent
It could be a door stop, a boat anchor, a weapon, a prop, a weight for holding down papers, etc., etc., etc. This is what a creative person would say about the possible uses of a brick.

14. imaginative
Creative people love to use their imagination to play to make seem real to experiment.

15. intuitive
The more creative a person is the more they tap their intuition skills; the abilities to see answers with minimum facts, to sense problems even when they aren’t happening.

16. original
Being original is a driving force for creative people. They thrive on it.

17. ingenious
Doing the unusual. Solving unsolvable problems. Thinking what has never been thought of before. These are all traits of a creative person that make them be ingenious at times.

18. energetic
Challenges, problems, new ideas once committed to by a creative person truly excite them and provide them with seeming unlimited amounts of energy; such as Sherlock Holmes once he grasps a sense of the mystery.

19. sense of humor
Laughter and creativity truly go together. Many experts believe that creativity cant occur without a touch of humor believing that seriousness tends to squelch creativeness or creative thinking.

20. self-actualizing
The psychologist Abraham Maslow created this term in the 1960s representing the ultimate motivator of people the need or desire to be all you can be, to be what you were meant to be.

22. self-knowledgeable
During my life I have read biographies and biographic sketches or over 4,000 people, mostly considered to be the highest of the highly creatives in their respective fields. One of the few things they had in common is that they all kept some form of journal and were constantly striving to better understand themselves.

24. divergent thinker
Creative people love to diverge from the norm, to look at things from multiple positions, to challenge anything that exists. Because of this they are seen at times to be off-key, deviant, atypical, irregular, or uncharacteristic.

25. curious
Like the Cheshire Cat of Alice in Wonderland, creative people are continuously curious, often child-like.

26. open-ended
In order to explore many possibilities creative people tend to stay open-ended about answers or solutions until many have been produced.

27. independent
Creative people crave and require a high degree of independence, resist dependence but often can thrive on beneficial inter-dependence.

28. severely critical
Yes creative people challenge most everything, every idea, every rule. They challenge, challenge, and challenge some more to the point that most other people see their challenging as severe criticism

29. non-conforming
Conforming is the antithesis, the opposite of creativeness and in order to be creative, creative people must be non-conforming and go against the norm, swim up stream.

30. confident
This is another ambiguous trait in creative people. When they are at their most creative they are extremely confident. When they are in a stage of frustration when nothing seems to be working they often lack confidence. After much positive experience they begin to trust themselves and know that they will become depressed, frustrated nearly devastated but their internal sub-conscious confidence keeps them moving or at least floating until they experience or discover an aha! (a breakthrough idea or piece of information)

31. risk taker
This trait is a general mis-understanding of many non-creative people or people who fear the creativeness of creative people. Highly creative people are not really risktakers because they do not see what they are doing as a risk. They simply see it as a possible solution or path towards a solution. They have other possible solutions, often many others in their head or their notes to use if a particular idea or solution does work. As Thomas Edison once said when asked how it felt to have failed nearly 7,000 times trying to discover the best filament for an incandescent light bulb, those are not failures, they are solutions to problems I haven’t started working on yet.

32. persistent
Charles Goodyear (discover & inventor of vulcanized rubber) and Chester Carlson (inventor of electrostatic copying, the Xerox process: xerography) are two of the best examples of this trait in creative people. Both of them worked over 30 years trying to make a solution they discovered work. Creative people do not give up on things that mean a lot to them.

The more of the 32 traits you choose the more creative you are or you have the potential to be or become. And the more potentially you are a CRAYON BREAKER.