This series activates the archetype of The Witness. I conceived of The Veils of Ignorance project upon coming across a quote by a Muslim feminist, “All women everywhere wear the burqa.” I remembered being molested as a child in Cuba, forced to watch as my 8-year-old friend was gang-raped, and recognized this to mean the burqa is but an outward symbol of a much more pervasive reality of oppression, one that is global not just regional.

The central imagery of the project evokes the much-contested Muslim veil even as it also invokes the reconciliation of liberty and equality explored in A Theory of Justice by John Rawls.  Symbolically, the veil thus overcomes its stigma of victimization to become a requisite for true justice.

For this project, I burned statistics culled from worldwide sources citing the frequency and severity of attacks on women and girls onto the veiled surfaces. Bits of poetry and terrifying accounts from interviews and blogs joined this raw data. I had to be hyper-aware of every burn mark– a moment of drifting and the whole thing would ignite. This ritualistic approach  felt like a kind of Tikkun Olam, as I aimed to restore attention to a subject so difficult to grasp

From the burned burqas emanate sound recordings– whispered testimony. Creating a call and answer format, each burqa murmurs her account, followed by a choral litany from the others.

The Veils/Prayer Flags animates the fragile figures, as they respond to the air displaced by gallery-goers.

Art Critic Susan Platt at The Wing Luke Museum, speaking about The Veils of Ignorance 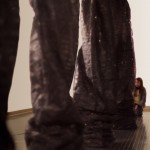 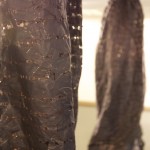 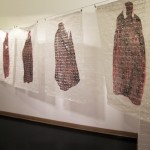 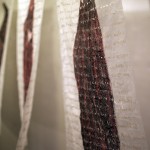