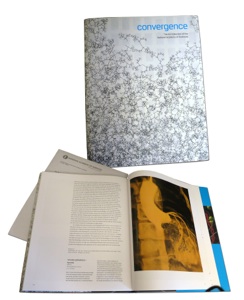 I had a wonderful surprise when I checked my mail today– A book in my mailbox!

“Honey, did you order something for me?” But my husband was as surprised. We opened the box and found a warm letter accompanying a complimentary copy of Convergence: The Art Collection of the National Academy of Sciences.

The book is a limited edition, but will be available as an online version for FREE very soon.  There are 14 essays with a variety of perspectives on the cross-disciplinary discourse between art and science. With LOTS of really amazing art. I’m super thrilled because my work is featured in it!

Is that awfully dorky of me?  Well, I’ve always maintained it’s far better to be happy than cool. And I’m very happy right now!