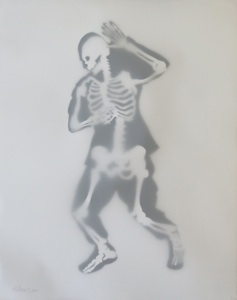 Something else I’ve been playing with, using figures from The Last Judgment. This time I’m working with sculpted paper/Mylar in a shadowbox. Working small at first, with single and multiple figures, just to experiment with the effects.

No, the picture’s not fuzzy.That’s the effect of the cut and folded paper coming in and out of focus as it pressed up against the frosted cover!